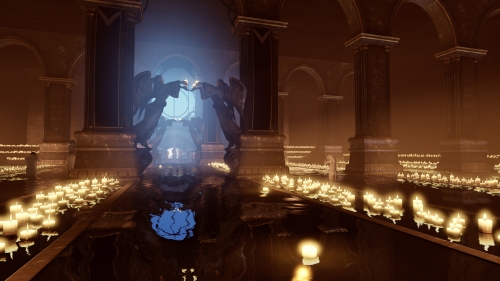 Before you’re allowed to enter the city of Columbia proper, you’re forced to undergo a baptism. Combined with the trip to Columbia (Ascending, ascending… hallelujah) there’s a very obvious Christian theme running throughout the game. Which only makes sense, of course, given that Columbia is basically all the things that America was ‘founded on’ taken to the extreme. Even being an atheist I found the scene beautiful, terrible, and after beating the game, incredibly poignant. Trust me on that. All in all, especially when combined with the pilgrims praying at the statues of the founding fathers just after that scene, it was a defining moment for the game. Religious or not, it’s a moment that defined Booker DeWitt’s trip into Columbia.

Apparently that scene was a bit too much for some. Kotaku has a write up about a man who was confronted with the forced baptism ceremony, and decided that his personal beliefs wouldn’t let him carry through with it. Of course, the baptism is mandatory to progress, so he was left with doing something against his beliefs or stuck with a game he couldn’t play. He e-mailed Steam, and Steam gave him a refund, and huzzahs were had all around. Kudos on Steam for giving him a refund, and kudos to the gamer for sticking to his guns, even if he misses out on one of the best gaming experiences in years.

What gets me about this article isn’t that someone is acting on their morals. That’s fine. It’s that this person somehow felt that the baptism in Infinite was a real baptism. That if he went through with it the gamer himself would be receiving a baptism. Not only is that pretty absurd on the face of it, it should make it impossible for this gamer to play most of the other major games in existence.

Mass Effect? Widespread murder, premarital sex, and alien sex. (I bet god frowns on that one.)

Seriously, just pick a game that has been vaguely popular and it probably involves murdering a whole bunch of people. Does that mean this person is more okay with ruthlessly murdering hundreds of digital people than he is with receiving a digital baptism? I think that says more about how people approach video games than anything else, that someone could be more offended by a fake religious ceremony than putting a spinning hook into someone’s skull.

More than anything, I just wonder at the cognitive dissonance. Clearly he thought of Booker DeWitt as himself, since the baptism offended him so, but does that mean he’d be okay with being a murderer?