The Power of: Civilization II 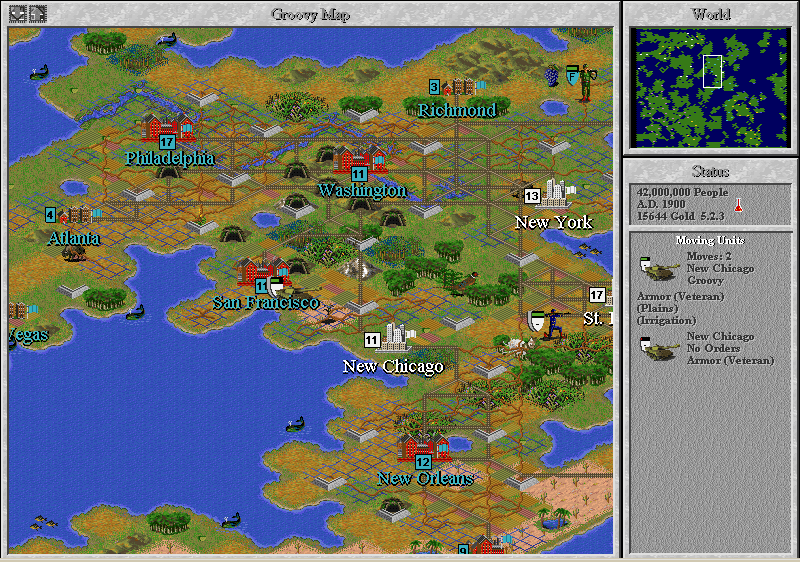 (Today, Schmamer Patrick Simpson takes us through a journey of self-discovery and crushing defeats. A lot of them. This is his most important game!)

There comes a time in every young boy or girl’s life where she must be broken; his spirit repeatedly pulverized, shredded and dismembered until every last ounce of self-respect and efficaciousness has vaporized and all that remains is a simple vessel, fit only to be trodden over by others more worthy of competently navigating life.  My reckoning came in the 8th grade, at the hands of a complete douchebag named Ben, made all the worse because Ben in no way embodied any of the qualities typically associated with vessels used in vaginal irrigation (he wasn’t made of plastic, for one) save earning my all-consuming temporary eternal disgust of him.

I would call Ben a rival, except that would imply that I was capable of beating him on occasion, which certainly wasn’t the case.  For anything.  Of course that hardly stopped me from trying, usually after throwing $20 at whatever stupid competition our half-witted 13 year old minds concocted that day, hoping the idea of losing something more tangible than my pride might awaken some latent ability that would finally allow me to kick his ass.  Somehow convincing myself the next Andrew Jackson could accomplish what his numerous predecessors had not.

Pretty sure half of his college tuition was paid through how many bets I lost.

So it came to be that Ben introduced me to Civilization II: Multiplayer Gold Edition while I was over at his place one night, and by introduced I mean briefly mentioned, because the mundane sounding name coupled with Ben’s younger sister starting to blossom into an attractive young lady didn’t leave much room for my already limited attention span to give much of a shit.  Nevertheless, through some divine miracle, the name stuck in the back of my head and I ended up purchasing the game the next time I needed something new to play.

Holy Jesus, to this day that is the best whim purchase I have ever made.  My life became completely engrossed in all things Civ, my dreams danced with German tanks, Roman legions and Elvis arguing with military drunkards centuries removed; it got to the point where it became a hard decision whether eating dinner was worth losing the hour I could otherwise be leading my glorious peoples in conquest (because you better believe I was militaristic as fuck.)

It would be worth noting at this point that I had a bad habit at that age (aside from a severe gambling addiction) of assuming that nobody could possibly love the games I did as much as I did.  I clung to them like a jealous lover, convinced the game and I were in a monogamous relationship; the thought of someone else investing as much of their time as I had into my game was anathema to me.  So when Ben suggested we start playing each other online, I became youthful arrogance corporeal.  That he was the one who suggested the game to me in the first place be damned! There was no possible way he loves this game as much as I do, therefore there is no possible way he could be nearly as good as I. Finally my day hath come!

I was disabused of this notion almost immediately.  Within the first 30 turns what pitiful dung heaps I had managed to construct were unceremoniously trampled underfoot by a torrent of Ben’s Roman forces.  Game after game, the only factor that determined how long I survived was how long it took Ben to find me.  His wrath was as merciless as it was relentless; it was— in a long history of sound defeats— the most dismal defeat I had ever suffered.  Going to bed stunned, I stewed in my humiliation long enough to work my dismay into something resembling resolve.  Like hell I was going to let things end like that, not least over my one true gaming love.

At first I resorted to my old standby, throwing money at a worthless cause, which proved to be as effective as always.  Then I scoured the internet for as much information about the game as I could find to squeeze into my vapid little mind; I found my first internet forum and got all sorts of great advice from sources much more knowledgable than I.  I set for myself a strict regimen of food, study and practice (of Civ), sleep, school, repeat; which I followed religiously for a good while.  I had never worked this hard toward anything in my entire life, and my due diligence was paying dividends, I could feel my skill increasing rapidly.

But my adversary was no mere mortal.  Regardless of how much better I was getting, my defeats continued to get worse.  Ben found ways to dispatch of me quicker and more ruthlessly than before, and continued to do so with each subsequent match.  He was adapting to my playstyle, learned the patterns and habits inherent to my gameplay, ones I wasn’t even aware of,  and knew how best to exploit them; each passing defeat only supplied him with more information.

It didn’t take me long to figure out that Ben was unusually gifted when it came to strategy games. To say it was demoralizing would be much too kind.  Being kicked in the balls had hurt less.  Until this moment I had no reason not to believe the old adage of “anything is possible if you try hard enough.”  Here I learned that the entire concept of talent runs completely contrary to that.  Given Ben and I could start on an equal footing of knowledge and experience, his instinct was just naturally keener than mine; he would still outperform me most of the time.

This might seem like a defeatist outlook to take— it certainly doesn’t fit the “unwavering perseverance is a virtue” narrative so often promulgated— but in fact it was one of the best things to happen to me.  It taught me that, perhaps, instead of expending all of that effort into something I wasn’t necessarily apt at, even something I dearly love, my efforts would be better focused identifying and developing my own talents.  And although I misidentify things I love doing with things I’m talented at, even today, those misidentified talents still lead me to other talents I didn’t know I had.

That isn’t to say to stop doing the things you love to only focus on the things you’re good at.  God knows I collect new hobbies like they’re going out of style, and I still play and love the Civilization series every bit as much as my 13 year old self. But just like every good Civ player knows some civilizations should emphasize science over culture, or military over diplomacy, in order to exploit their full potential,  knowing which traits to emphasize in our own lives can make a world of difference.

Of course the most valuable lesson I learned was to just not play games others can beat me at.